Sketchbook Page 58: W is for Wolpertinger 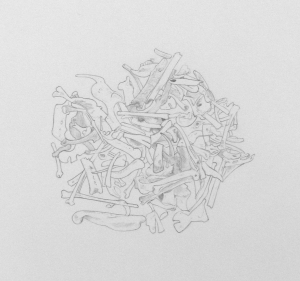 Bones from a Bestiary part 23: W is for Wolpertinger

This is the twenty-third in a series of chimerical creatures; the aim is to create an alphabet of fabulous beasts over the coming months.

With recent advances in genetic engineering it should be possible to manufacture such creatures in the laboratory; although the results will not always be practical (or, indeed, humane) …

It has a body comprised from various animal parts  — generally wings, antlers, tails and fangs, all attached to the body of a small mammal. The most widespread description portrays the Wolpertinger as having the head of a rabbit, the body of a squirrel, the antlers of a deer, and the wings and  — occasionally  — legs of a pheasant.

Stuffed “Wolpertingers”, composed of parts of actual stuffed animals, are often displayed in inns or sold to tourists as souvenirs in the animals’ “native regions”. The Deutsches Jagd- und Fischereimuseum in Munich, Germany features a permanent exhibit on the creature.

It resembles other creatures from German folklore, such as the Rasselbock of the Thuringian Forest, or the Elwedritsche of the Palatinate region, which accounts describe as a chicken-like creature with antlers; additionally the American Jackalope as well as the Swedish Skvader somewhat resemble the Wolpertinger. The Austrian counterpart of the Wolpertinger is the Raurakl.

You are currently reading Sketchbook Page 58: W is for Wolpertinger at osteography.