Sketchbook Page 52: P is for Piasa 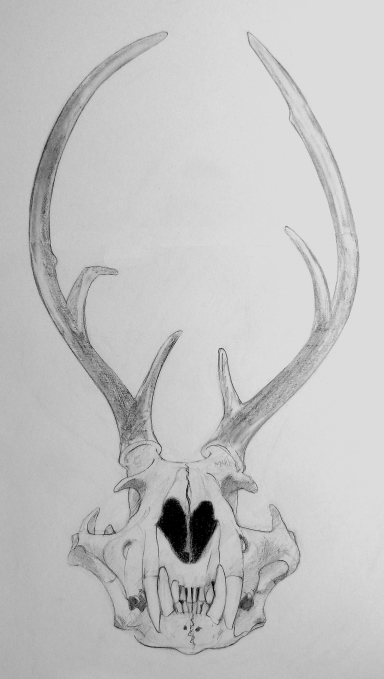 Bones from a Bestiary part 16: P is for Piasa

This is the sixteenth in a series of chimerical creatures; the aim is to create an alphabet of fabulous beasts over the coming months.

With recent advances in genetic engineering it should be possible to manufacture such creatures in the laboratory; although the results will not always be practical (or, indeed, humane) …

The Piasa (/ˈpaɪ.əsɔː/ py-ə-saw) or Piasa Bird is a Native American dragon depicted in one of two murals painted by Native Americans on bluffs (cliffsides) above the Mississippi River. Its original location was at the end of a chain of limestone bluffs in Madison County, Illinois at present-day Alton, Illinois. The original Piasa illustration no longer exists; a newer 20th century version, based partly on 19th-century sketches and lithographs, has been placed on a bluff in Alton, Illinois, several hundred yards upstream from its origin. The limestone rock quality on the new site is unsuited for holding an image, and the painting must be regularly restored. The original site of the painting was a high-quality (6–8 foot thick) layer of lithographic limestone, which was predominantly quarried away in the late 1870s by the Mississippi Lime Company.

A modern reproduction of the “Piasa Bird”,
on the bluffs of the Mississippi River in Alton.
Wings were not described in Marquette’s 1673 account.

The ancient mural was created prior to the arrival of any European explorers in the region, and possibly before 1200 CE. It may have been an older iconograph from the large Mississippian culture city of Cahokia, which began developing about 900 CE. The location of the image was at a river-bluff terminus of the American Bottoms floodplain, the site of the Cahokians, the largest prehistoric city north of Mexico and a major chiefdom. Cahokia was at its peak about 1200 CE, with 20,000 to 30,000 residents. Icons and animal pictographs, such as falcons, thunder-birds, bird men, and monstrous snakes were common motifs of the Cahokia culture. The Piasa creature may have been painted as a graphic symbol to warn strangers traveling down the Mississippi River that they were entering Cahokian territory.

An Alton Evening Telegraph newspaper article of May 27, 1921 stated that seven smaller painted images, believed to be of archaic American Indian origin, were found in the early 20th Century approx. 1.5 miles upriver from the ancient “Piasa” creature’s location. These pictures were carved and painted in rocks located in the “Levis Bluffs” area by George Dickson and William Turk in 1905. Four of the these paintings were of “an owl, a sun circle, a squirrel, and a piece showing two birds or some kind of animals in a contest”, the other 3 paintings were of “a great animal, perhaps a lion, and another an animal about as large as a dog”. These paintings were photographed by Prof. William McAdams and were to be placed in his book “Records of Ancient Races in the Mississippi Valley: being an account of some of the pictographs, sculptured hieroglyphs, symbolic devices, emblems and traditions of the prehistoric races of America, with some suggestions as to their origin” William McAdams, C. R. Barns Publishing Co., 1887. These seven archaic American Indian paintings have been lost in recorded annals as they were to have been in transit to the Missouri Historical Society circa 1922. Other Native American carved petroglyphs of a similar time period and region as the Piasa monster are carved into the rocks at Washington State Park, De Soto, Missouri (approx. 60 miles southwest of the current Piasa image).

The name Piasa may also have been derived from the Native American Miami-Illinois word páyiihsa (cf. Anishinaabe: apa’iins(ag), “little people(s)”).This was their name for small, supernatural dwarves said to attack travelers. Local claims that the word “Piasa” meant “the bird that devours men” or “bird of the evil spirit” are not accurate nor based in the Illinois language.

In 1673, Father Jacques Marquette saw the painting on a limestone bluff overlooking the Mississippi River while exploring the area. He recorded the following description:

“While Skirting some rocks, which by Their height and length inspired awe, We saw upon one of them two painted monsters which at first made Us afraid, and upon Which the boldest savages dare not Long rest their eyes. They are as large As a calf; they have Horns on their heads Like those of a deer, a horrible look, red eyes, a beard Like a tiger’s, a face somewhat like a man’s, a body Covered with scales, and so Long A tail that it winds all around the Body, passing above the head and going back between the legs, ending in a Fish’s tail. Green, red, and black are the three Colors composing the Picture. Moreover, these 2 monsters are so well painted that we cannot believe that any savage is their author; for good painters in France would find it difficult to reach that place Conveniently to paint them. Here is approximately The shape of these monsters, As we have faithfully Copied It.”

Later French explorers, like St. Cosme, reported that by 1699 the series of images were badly worn due to the habits of the local Indians to “discharge their weapons” at the images as they passed. Author A.D. Jones, in his book ” Illinois and the West” c.1838, also describes the ravages of weapons (firearms) upon the images, and further refers to the paintings as being named “Piasua”.

The monster depicted in the mural was first referred to as the “Piasa Bird” in an article published circa 1836 by John Russell of Bluffdale, Illinois. John Russell was an imaginative professor of Greek and Latin at Shurtleff College, Upper Alton, Illinois. The article was entitled “The Tradition of The Piasa” and Russell claimed the origin of the word to be from a nearby stream : “This stream is the Piasa. Its name is Indian, and signifies, in the Illini, “The Bird That Devours Men”.” [note: The original “Piasa Creek” ran thru the main ravine in downtown Alton, and was completely covered by huge drainage pipes circa 1912.] According to the story published by Russell, the creature depicted by the painting was a huge bird that lived in the cliffs. Russell claimed that this creature attacked and devoured people in nearby Indian villages shortly after the corpses of a war gave it a taste for human flesh. The legend claims that a local Indian chief, named Chief Ouatoga, managed to slay the monster using a plan given to him in a dream from the Great Spirit. The Chief ordered his bravest warriors to hide near the entrance of the Piasa Bird’s cave, which Russell also claimed to have explored. Ouatoga then acted as bait to lure the creature out into the open. As the monster flew down toward the Indian Chief, his warriors slew it with a volley of poisoned arrows. Russell claimed that the mural was painted by the Indians as a commemoration of this heroic event.

Some sources report that this account was simply a story created by John Russell. In the book “Records of Ancient Races in the Mississippi Valley…” Chapter 2, 1887 by W. McAdams, the author says he contacted John Russell and Russell admitted the story was “somewhat illustrated”. The bird imagery is not reported in Father Marquette’s description, which makes no mention of wings. It is also possible that Marquette’s description and Russell’s account were both accurate for their respective times. The image may have been repainted at some point between 1673 and 1836 to revise its appearance and iconography.

When contemporary historians, folklorists, and tourism promoters are looking for a narrative description of the story behind the Piasa “Bird”, they often rely on Russell’s account. This colorful version of the tale can be adapted to allow a wide range of interpretation and allow other cities and counties to claim promotional rights to the legend.

§ One Response to Sketchbook Page 52: P is for Piasa

You are currently reading Sketchbook Page 52: P is for Piasa at osteography.